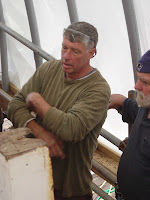 When it comes to a true Mainer, Jim Jones comes to mind. Jim was a boat builder's son who grew up in East Boothbay and now 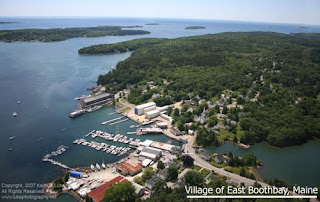 works for Boothbay Harbor Shipyard. His shipbuilding days started as an apprentice at his father's shipyard, where they built small pleasure and lobster boats. Many children in Maine wait for that treasured "snow day" in order to get a day off of school, but Jim waited for the "steam bent frame day". Occasionally, that perfect day would come around when Jim's father would need help with the frame timbers, which came out of the steam box and Jim got the day off to help him.

Jim got his boat building skills by apprenticing with his father and later taking over his father's shipyard. Boothbay Harbor Shipyard was lucky to employ Jim three years ago with his calm demenor and knowledgable boatbuilding skills.

When Jim is not in the shipyard, he enjoys fly fishing at his camp near the Forks in northern 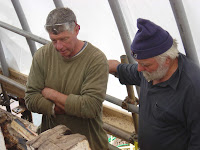 So what would he like to do that he hasn't? Top on his wish list is traveling to Alaska or the arctic. What could be a better location for a fly fisherman?
Posted by Boothbay Harbor Shipyard Shipwrights at 10:42 AM No comments: 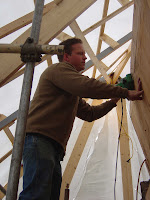 The conversation of where one grew up is usually short and crystal clear. Not so with
Todd Kosakowski. Growing up in a nomadic lifestyle as the son of a foreman of bridge and road construction, Todd went to 27 different schools.

Todd, who has been recently working on Ernestina has been closely connected to boats and ships since high school. His love of boats began when he received a scholarship from Outward Bound at Hurricane Island.

After high school, Todd began his ventures on Tall Ships. He crewed in Key West on the Liberty Clipper where he met his future wife, who 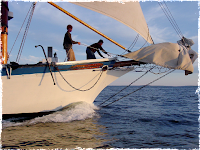 at the time, was the Captain. He later crewed or was the mate of Appledore II, Lettie G. Howard (a 1894 schooner out of Gloucester), and the Amistad in New London, CT. As a winter maintenence coordinator aboard Clearwater, on the Hudson River in New York, Todd began learning about the building of ships through such tasks as repairing the planking on the deck.

Recalling that his first boat experience began in Rockland as he left for Hurricane Island, he began a full circle experience by attending the Apprentice Shop at the Atlantic Challenge also in Rockland. Following his graduation, he applied to the Boothbay Harbor Shipyard and was 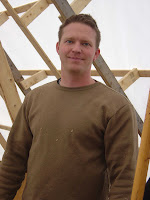 shortly offered a job which he feels is one of his all time favorites.

As a new dad of a nine month old daughter, Ava Katherine, Todd enjoys spending time with his family. In his tiny bits of extra time he loves to work on his 36' Rhodes sloop and brew beer.

When asked what he would like to be doing in five-years, he commented that cruising in a sailboat with his family would be at the top of his list.
Posted by Boothbay Harbor Shipyard Shipwrights at 12:08 AM No comments: